This is the end. On the 10th of September, year 2021, I successfully defended my doctoral thesis in the University of Geneva, Switzerland, and obtained the title of Doctor of Philosophy in Astronomy and Astrophysics (or, more precisely, Docteur mention astronomie et astrophysique). My thesis is now a thing of the past, and I have started to move on to a new phase of my life. So, in a sense, this is also a beginning. 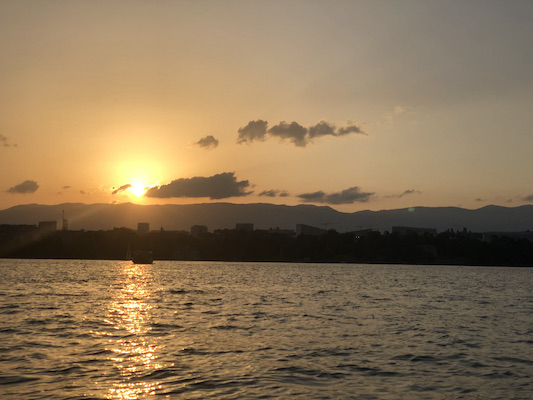 I took a flight to Switzerland in mid September of 2017, with only a couple of hundred Swiss francs in my wallet, holding my breath with high expectations for the next four years. The first thing I noticed when I arrived was that the ride would be bumpy without knowing the local language. In Geneva, despite being one of the most international cities of the country, you cannot always get around without knowing French, especially when you stray away from the city center. Later, I would also learn that you should always, and absolutely always, say bonjour.

The first project of my doctoral thesis was to simulate signatures of Earth-like exoplanets in the ultraviolet, and if we could detect them using the Hubble Space Telescope (HST) or other future instruments. The first version of the manuscript that we submitted for peer-review was poorly received, and we almost got a rejection. It took me several months to revise the manuscript and improve it, but we finally got it published in 2019.

Most of my subsequent projects would be related to HST observations of atmospheres on exoplanets. These were very productive years, but I stayed below my original aim of two articles per year as a leading author – my actual productivity rate ended up being 1.5 manuscripts per year. But later I would learn that the key for a successful career in science is not only on how many articles you can pull out, but on many other factors, including sheer luck. There are so many unknowns in science, that we can never be completely sure if our projects are going to be a hit or miss, so sometimes it pays off to be involved with a few different ideas and then see what sticks. It is the equivalent of putting your eggs in several different baskets.

For example, in the last year, I have been developing my own theoretical treatment for atmospheric escape in exoplanets, and the code I developed, p-winds, is openly available online. We have also submitted the paper for peer review very recently. I am very excited with other projects happening at the moment, and will be happy to write about them when the time comes.

When I was preparing for my thesis defense a few days before the fact, I was frequently asked “are you ready”? To the astonishment of my work colleagues, I was just as serene and calm as I have always been, sipping on my little cup of espresso and lazily making small talk. The truth is that I had nothing to be preoccupied of: the actual thesis was written and delivered, the presentation was prepared, and I enjoy giving talks, so the preparation process was fairly free of anxiety. And yet, when I finished my thesis defense, I was drenched in sweat. But I blame the lack of ventilation of dress clothes.

And after the fact, the frequent question of my peers changed to “how do you feel now”? And honestly, it was difficult to put it in words. The problem is that I did not feel different: I have a title of doctor now, but that does not change much, I am still a sufferer of the human condition just like anyone else. But deep down I feel proud: proud of being the very first Ph.D. of my close family, and the second in my extended family after a cousin.

As I wrote in a previous post, I am about to move to the Space Telescope Science Institute as a Postdoctoral Fellow to work independently on my own research projects, as well as provide service to HST. These are exciting times! But it is a deep dive into the unknown, and that is always a bit scary: new city, new people, new work environment, new projects, new routines. Moreover, every day I get more and more worried about what is happening in my own home country, which may be on the verge of a coup d’État. The future of our people and our scientists looks grim and it keeps me awake at night. There is no measurable amount of doctoral degrees that will mitigate these woes, so it feels weird when people ask me about feeling relief when I can’t possibly make a dent on the actual suffering. I do not know what is going to happen in the next four years. But I will do my best to make the world a little bit more peaceful than how I found it.