The Hubble Space Telescope (HST) is going through some difficult problems with its payload computer at the moment. This issue has stalled observations since June 13th, but not all hope has been lost. While NASA strives to fix one of the most productive telescopes ever made, we on the astronomers side keep churning out observing proposals for HST. Last week, we finally got the results for the selection of observing programs in the Cycle 29, which extends from October 2021 to September 2022. I am happy to report that, this time around, I was awarded not only one, but two observing programs on HST as a Principal Investigator. Let’s talk a bit about them and other exciting upcoming science with our favorite space telescope. 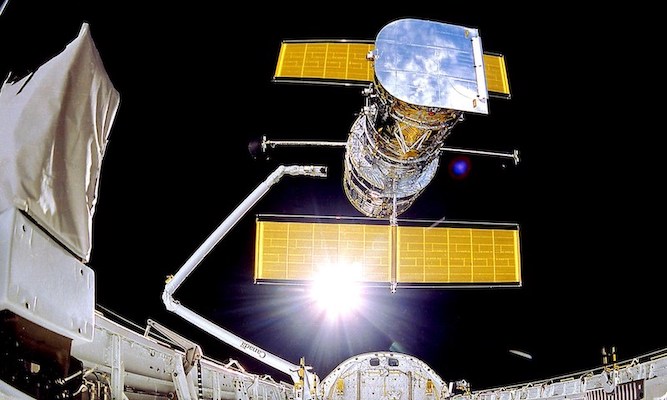 The image above, credited to NASA, Smithsonian Institution and Lockheed Corporation, shows the Hubble Space Telescope being deployed by the space shuttle Discovery back in 1990. There is no denying that HST is one of the most important astronomical facilities of the last three decades. But that kind of accomplishment could only be achieved because of one important fact: any astronomer, independent of the their affiliation or their academic level, can in principle request for observing time. The challenge with this setup is that there are a lot more time requested than time available to observe with HST by a factor of approximately 10 (also known as the pressure factor). That means that, when the astronomical community asks for 10 hours of observing time, only one hour is effectively accepted as a regular program. So, in the end, we have to compete with other astronomers to see who is proposing the best science case.

Dear reader, if you have not been introduced yet, I welcome you into the infamous world of telescope observing proposals. If any facilities have a general observing program, which means telescope time open to the whole community independent of their affiliation, we have to apply and compete for the limited amount of time available through proposals. The European Southern Observatory (ESO) has one, the Gemini Observatory has one, the Keck Observatory has one, the James Webb Space Telescope has one, pretty much any astronomical facility has one. And most of them follow an evaluation method based on peer-review, similar to how we submit manuscripts for publication in scientific journals. In other words, our own astronomer colleagues will be the judge of our proposed science case. It is also up to the reviewers to decide on what is considered the best science cases, and sometimes they decide it collectively.

Now, this system has many advantages and also its own set of issues. In this post, I will not discuss these things in long detail, because they are subject to a lot of debate and are chock-full of nuance, which I do not have time to cover at the moment. But many steps have recently been taken to diminish selection bias, one of the main problems with the peer-review system. For example, both NASA and ESO have adopted a double-anonymous review system in which neither the authors of the observing proposal or the reviewers know each others’ identities. In an open-access article published in the journal Publications of the Astronomical Society of the Pacific [1], S. Johnson and J. Kirk show that adopting double-anonymity for the HST proposal reviewing process did in fact reduce the gender bias in the approved programs.

Anyway, the results of the selection of HST programs for Cycle 29 have been published as of today, and you can find in this dedicated page from the Space Telescope Science Institute. To me, it is exciting to see a good haul of approved programs dedicated to exoplanet science, and particularly in the ultraviolet (UV). This is significant because HST is the only telescope currently available to us that is capable of observing at UV wavelengths. So it is not surprising to see that there is large interest, given that the space telescope is likely going to stop working sometime within the next decade or so.

From my side, I am involved with three accepted HST programs: 16723, 16724, and 16726. All of them are dedicated to study a phenomenon called atmospheric escape. Pretty much any planet lost their atmosphere to space at some point in their lives, either partially or significantly. This happens because very light atomic species, like hydrogen and helium, are able to overcome the gravitational pull of the planet, especially when they are heated up by intense stellar irradiation. This happens ubiquitously across hot exoplanets, and there are ways to observe atmospheric escape happening. This is what we proposed to do in these programs. One of the most pressing questions in the field of exoplanet science is to understand how well planets can retain their atmospheres in the face of an evolving irradiation environment, especially when they orbit close to their host stars. More observations are needed so that we can pin down the exact physics behind atmospheric evolution.

What is even more exciting about these three programs is that they actually probe different regimes of exoplanetary atmospheres: We are going to observe an ultra-hot Jupiter, a mildly-irradiated young Neptune, and a multiplanetary system of super-Earths. It is likely that each planet in these programs is undergoing a different regime of atmospheric escape. For instance, ultra-hot Jupiters likely experience the most dramatic cases of escape because they are, well, ultra-hot and have plenty of hydrogen to lose. On the other hand, super-Earths are expected to be exhibit less dramatic mass loss, but still detectable and important for its atmospheric evolution. We expect Neptunes to be somewhere in the middle, but what is cool about a young planet is that their host stars shine very strongly in high-energy wavelengths, which could cause mass loss rates as large as hot Jupiters. However, such a case remains to be tested, and that is exactly what we want to do.

I am also very excited about programs from other teams, such as the UV characterization of exoplanet hosts that will be observed with James Webb (program 16701) and the comparative study of exoplanet atmospheres in low-metallicity environments (program 16736). But with all that said, for now there is not much we can besides waiting for HST to be brought back online. Oh, and also prepare the Phase II of the accepted programs.