A day in Mars

It is likely that the planet Mars was, billions of years ago, just as warm and wet as our own Earth. Nowadays, it is a cold wasteland that lost most of its atmosphere and retains only a tiny amount of carbon dioxide and trace gases. Sometimes, Mars gets covered by global dust storms that literally change how the planet looks. On 6 February 2021, yours truly, a dweller of tropical lands who currently lives in a mild-weather country in Western Europe, witnessed a local event akin to a Martian dust storm for the first time in his life. 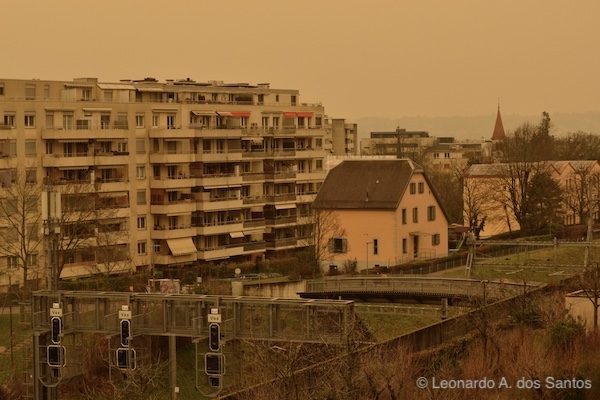 But before I dive into the actual cause of orange skies in Switzerland, let me take a quick tangent into digital photography, since it is so tightly bound to astronomy in its origins [1].

The photo above is not color edited, this is how the day actually looked like. I took it using my DSLR camera with a manual white balance. See, most cameras that people carry nowadays are in their pockets, within their smartphones. Although these cameras have come a long way in taking amazing photos without the need for experience in post-processing and editing, they come with a price: a computer, in this case the smartphone that powers the camera, will automatically take the reins in making choices about the colors of your photos [2]. Smartphone cameras are configured in such a way that they will automatically set the white balance by assuming that the user is always under normal lighting conditions. Which, in 99% of the time of casual photographers, is a pretty good compromise. But for the remaining 1% where you actually need color accuracy to portray an eerie cloudy morning with orange skies, the smartphone will try to correct the color balance to “normal” by removing some or most of the fruity tint in the photo. This behavior is sometimes set with machine learning, but if the algorithm never sees an orange sky, the smartphone will never be trained to understand that this is something we want to keep in the photo.

So, a camera with a manual white balance is needed to take a photo like that above. In the case of my DSLR camera (now an old Nikon D3100 I bought in 2013), luckily I had previously set the white balance using a white piece of paper under a bright, normal non-orange cloudy sky. This setting was perfect to capture the alien-looking tint of the day!

One thing I noticed on 6 Feb 2021 when I woke up in the morning was that the sky looked more orange than normal, but initially I thought it was because the Sun was rising. Now, orange skies during sunrise and sunset normally last just a couple of minutes, but that effect I was witnessing prevailed for about an hour by the moment I realized something was up. My next assumption was a forest fire, since there are many woods around here. But the humidity was very high, around 80%, so it was unlikely. Volcanic ash, perhaps? There are some volcanoes in nearby Italy.

No, the reason is something I had neither thought of, or witnessed before in my life: very fine dust coming from the desert. As the French meteorologist Frédéric Nathan explains, winds coming from the south carried sand dust from the Sahara desert, more specifically from Morocco, all the way up North to Europe. More frequently, wind currents take sand from the desert across the Atlantic Ocean to the Antilles or the Mediterranean sea to Southern France. The air coming from the desert is warmer, and thus it rises above the colder northern air, contributing to the formation of high altitude clouds that carry dust for very long distances. 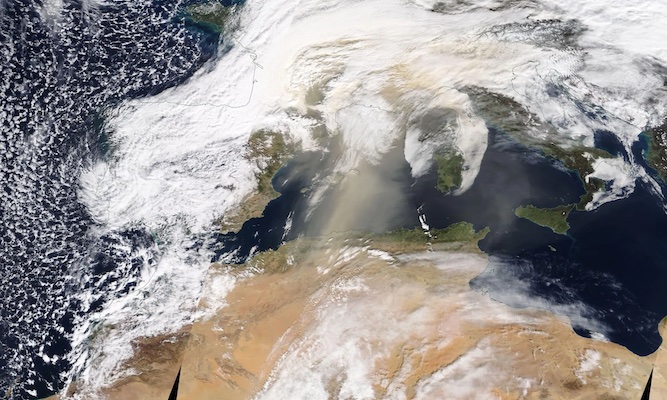 One interesting consequence of the combination of a dusty atmosphere with the high humidity here in Switzerland is that, because the air is thick with particles, it facilitates the formation of small water droplets that quickly grow and precipitate. These, on the other hand, carry down the sand from the air to the surface in the form of dirty rain. So, if you went outside during the orange sky time, yours clothes would likely be covered in dirt, and all the cars will need some washing at some point. Good news for car-washer owners in these pandemic times [3].

The physical explanation for orange skies is also something that I would like to briefly touch upon. The desert sand from Sahara is not exactly orange, although this is how sometimes it is depicted in movies and TV shows [4]. The sand has a beige color, as seen in the satellite image above. What happens is that the very fine dust particles whose sizes are similar to wavelength of blue light (a few hundred nanometers), causing an effect known as Mie scattering. The particles will absorb bluer light, leaving only longer-wavelength, redder light to shine upon the surface. This effect explains both the orange tint of the sky, as well as the less amount of light reaching our eyes. Mie scattering should not be confused with Rayleigh scattering, which is what causes our clear skies to be blue, and sunset and sunrise to be red.

So, it turns out that this days was not exactly like being in Mars. I could still go out and breathe without my eyes popping out, the temperature was a balmy 6 degrees Celsius, and the worst thing that happened was getting my jacket covered in dirt. And in the process I learned a lot about European weather patterns, and relived my college days reading about CCDs and Mie scattering. What a Saturday!